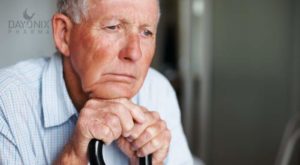 Some people with dementia may also experience changes in their emotions, personalities and behaviour.

Dementia ranges in severity from the mildest to the most severe stage, depending on the parts of the brain that are damaged and the disease that is causing the dementia. Most types of dementia cause a gradual worsening of symptoms over the course of years due to progressive damage to nerve cells in the brain caused by the underlying disease process, which is referred to as neurodegeneration.

Some mild changes in cognition are considered a part of the normal aging process while dementia is not. Dietary supplements in some cases slow the progression of dementia and reduce the associated responsive behaviours.

What are different types of dementia?

Dementia may be of 100 different types. Some of them include:

Where small clumps of protein, known as plaques, begin to develop around brain cells. This may lead to severe loss of memory over time.

Where there are problems in the blood supply to the brain. The brain does not receive adequate oxygen.

Where small abnormal structures, known as Lewy bodies, develop inside the brain.

When frontal and temporal lobes (two parts of the brain) start shrinking. This may occur in individuals under 65 years of age. It is much rarer than other types of dementia.

What are the symptoms of dementia?

Dementia symptoms vary depending on the cause, but common signs and symptoms include:

Worldwide, around 50 million people have dementia, with nearly 60% living in low- and middle-income countries. Every year, there are nearly 10 million new cases.

The estimated proportion of the general population aged 60 and over with dementia at a given time is between 5-8%.

How is age related to dementia?

As people age, dementia becomes progressively common, yet this does not mean that dementia is an inevitable consequence of normal aging. Dementia is not only an illness that affects almost 40% of people over 85 years old but also a disorder defined as the onset of symptoms before the age of 65 year.

Can dementia be prevented?

Are there medicines to treat dementia?

Although there is no cure for dementia yet, there are supplements and medications that may improve memory and mental health. There are also medications that are effective for treating mood disorders, such as anxiety and depression, which commonly occur in people with dementia. It is also important that your provider carefully evaluates any medicine someone with dementia is taking, because some medications may make memory symptoms worse.